Available Now! Grab your copy of this boxed set full of night crawlers with a thirst for blood. They won't stop at a sip or taste. Let them bite into you and sweep you away on a romantic adventure. 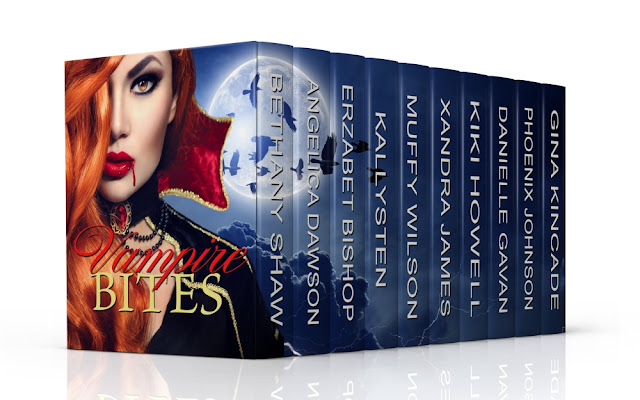 Here's what you can expect from each of these authors:

The Vampire's Witch by Kiki Howell
The Willows is a resort town run by vampires, werewolves and witches. Here, their true identities are kept secret from humans, and intimate relations between the individual clans are strictly forbidden.
When it becomes known that the vampire Amberlyn has fallen in love with the werewolf Kane, the tedious line of their co-existence has been crossed. Caught in the crossfire of this revelation, Drake, the vampire clan leader and Amberlyn’s maker, is killed along with an innocent witch. These deaths spark a series of horrific events leading to an all out War In The Willows.
Unexpected close encounters, bodies ripe with need, and situations beyond their control lead to forbidden relationships. Now three vampires, a witch, a werewolf and a human must ride along the edges of the rules. They will attempt once unthinkable romantic entanglements despite all those who oppose their relationships, while fighting for their lives as well.
With the Willows full of violence and bloodshed, meetings and magic amiss, will the clans ever be able to find peace among them again? Or, will this war destroy the Willows?
In Book 1, Amberlyn’s vampire brother, Isaac, always one to kick ass first and deal with the consequences later, kidnaps a witch, Winter. He intends to find out what type of retaliation the witch clan is planning against the vampires and werewolves. In doing so, he finds so much more then he bargained for.

How does a twentieth century woman take back control over her own body? By giving that control to the right man.
What if you could have limitless sexual pleasure, at the price of your own blood?
Where does the girl who has done it all go when she wants something new?
Jocelyn considers herself sexually experienced, a leader and manipulator. She is looking for the next challenge. The rumors surrounding Blue Moon House sound like just the thing she's looking for. Losing her roommate to marriage, she also needs a new place to stay. Hoping to find both in the same entity, she follows the rumors to their source and finds much more than she bargained for, beginning with a discovery that defies her biological science background – vampires.

The Return of Their Master by Phoenix Johnson

Angie and her vampire sisters are happy, making their lives in the modern world after escaping from their abusive Creator, Vitalis. Jake is a mortal man who has fallen hard for Angie, unaware of her secret and just how it affects his own life. Their lives, however, are about to be thrown into chaos. Has Vitalis really found the sisters after all these years, just as Angie finds love?
Preparing to battle for their freedom and the life of their sister, Angie must ready herself. Not only must she take on the father she once loved, but she also must choose between the mortal life she wanted with Jake, or to protect vampires and humans alike from an unknown, ancient threat.
The Return of Their Master is the first taste of a dark world held in check by a covenant that Angie believed was a myth. She is the only thing standing between the world of humanity and utter chaos, but will she sacrifice her chance at a normal life with the man she loves?

Mari Di Bartolo was a witch coming back to her roots in Salem. Juggling work and school, she is a woman on a mission until she is attacked one night after work and left for dead. When Mari is about to step through the veil, she is given a choice-become a vampire or fade away. She chooses life. Nevertheless, it’s not her new Sire that holds Mari’s attention, but the strange and enigmatic Fae with the golden green eyes. Full of mischief and mayhem, the night of the Vampire Ball is upon her and all that glitters may just be her teeth in the moonlight.
Darkness lurks in the shadows…
Fenris is the Captain of the Guard for the Queen of the Dark Court. For centuries he’s secured the barrier between the human world and Faery, part of a Protectorate that keeps humans blissfully ignorant of the beings hidden in their midst. But when another rogue wolf attack brings him to a crime scene, he remembers another girl with long dark hair and eyes that spoke to his soul. On a night filled with wild magic, there will be blood and some of it might just be given willingly.

Sworn to protect those who believed in his gods, Fallen has defended humanity from the shadows of night for thousands of years. But Alexander Leka, the man behind the fangs, refuses to relinquish his humanity to the whims of blood-sucking deities. His life and eternity are dedicated to their service—until those very gods suddenly disappear, and leave Fallen’s fate in the hands of another. The key to his salvation? A woman whose beauty haunted him through the ages.
Zoe Mesha lives in the shadows, hiding from the sun and the sickness it brings. She dreams of warm beaches, basking under a pale blue sky, and a man with the most unusual eyes. Zoe is certain her dream man doesn’t exist and that his amber orbs are a figment of her fascination with the sun. But when he comes to her rescue one night she can’t shake off a crippling tide of fear as they come face to face with each other. Convincing Zoe to look beyond his vampirism and see him for the man within will not be an easy task. If anything, it will be the greatest battle of Fallen’s life. One he must win, at all costs.

Evelina: From Blood to Dust by Xandra James

A vampire assassin shouldn't fall in love. So when I did, I knew it couldn't last. I walked away and didn't look back...until the man I loved was threatened by those I trusted. It was down to me to save him and I wouldn't fail. I'd stayed alive for eighty years, but matters of the heart were definitely harder than taking a life.
My name is Evelina and Dr Benedict Hamilton is my addiction. He's also the reason I'm going to die.

The Truce by Bethany Shaw

Shep hates the Florida Everglades. It’s hot, humid, oh and his ex lives there. Abby is the one woman he wants but can never have. She’s a werewolf and he’s a vampire who can’t give her what she needs, which is why he chose to end their relationship years ago. His goal is to kill the vampire preying on the innocent and stirring up the local community without being noticed by Abby’s pack. All is going to plan until he falls six floors to his temporary death. It’s a good thing vampires heal fast. He wakes up ready to stake the menace wreaking havoc, but fate has different plans. Not only is he chained and locked in a cage, but also his cellmate is the one woman he wants but can never have. He can’t stand the thought of anything happening to Abby and vows to keep her safe, but that’s going to be easier said than done.
Twenty-three years ago Shep walked out on Abby, taking her heart with him. She moved on as best as she could and has secured a role as an enforcer in her father’s pack much to his chagrin. When a routine patrol goes awry, Abby finds herself face to face with the man who still holds a piece of her heart. What’s worse, the rabid vampires that captured them plan to make them a meal. When Shep suggests a truce to get out of their predicament she hesitantly accepts. But the last time they worked together she lost a piece of herself and she never truly got it back. Can she escape the hostile environment and keep her heart from getting broken again?

Maybe Another Time:
A Standalone On The Edge Novella by Kallysten

After a century and a half, Lucien has no illusions about vampires being treated fairly by humans. All he hopes for is to find willing prey to feed from without having to kill—and occasional company to break the monotony of lonely nights. A large scar, however, a frightening souvenir from his siring, scares away many humans, and more often than not he gets kicked out of blood bars and dance clubs for little more than his appearance.
When a new club opens in town that is touted as a meeting place for vampires and humans, he reluctantly gives it a try. On his first night there, he is pleasantly surprised… until the young woman with whom he shares a glass of wine and pleasant conversation at the bar realizes what he is.
If Zoe had had her wish, the bachelorette party for her best friend would have taken place anywhere but at On The Edge—anywhere vampires are not welcomed so openly. Unlike the rest of the bridal party, Zoe has a healthy wariness of vampires... Or could it be more than wariness, and less than healthy?
Every aspect of her life seems governed by patterns she can’t overcome, from the way she yields in conflicts to her inability to believe anyone might be interested in her extra curves. Could changing one thing—her fear of vampires—be the one small step that starts her on a new life journey?

Immortal Hearts by Muffy Wilson
"This is the story about my death.
It is not as it should be but as it is.
It is not how I expected but, in the end, how I wanted.
It is not too soon but sooner than I thought for my years.
What it is?
It is perfect.
I am the sun, the wind, the stars in your eyes as you gaze into the moonlit heavens.
I am you, with you, in you—under your skin.
I reside in your heart.
And yet, is it not as it should be because it is our destiny.
It is our hearts, eternally entwined.
It is us—Immortal.
I am one with the night.
I am one with my love.
The platinum orb rose slowly above the burning, flaming horizon.
Like the moon, I am refreshed, now, in the shadows, adorned by diamonds and surrounded by glittering, shooting madness.
The sun so loves the moon that it dies each sunset that the moon may rise another night to honor the darkness.
I blossom as the day withers and fades into the black satin folds of the moon’s embrace.
My joy ignites as the stars unveil their jewel-like splendor.
Inevitably, a midnight tear bids a love so light in darkness adieu with the fall of the morning moon to welcome her fiery radiance anew.
And I am born to the night with, and by, my love.
Adieu ~"