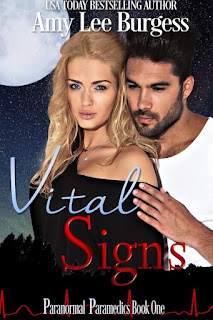 Now Available for pre-order at #99cents for a limited time! ***BRAND NEW & EXCLUSIVE*** 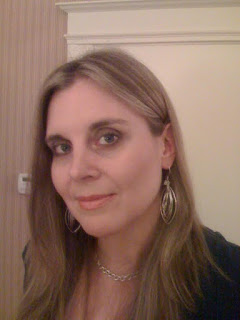 Amy Lee Burgess is ruled by two rescued dachshunds, who graciously allow her to write about dragons, wolf shifters, vampires, gargoyles, and the occasional contemporary couple in her free time. When she’s not writing, she’s taking long walks in the woods(with the dogs, of course), exploring her new neighborhood in Apex, North Carolina (also with the dogs), and exploring farmers markets and other places around town (sometimes with the dogs).

You can find her @amyleeburgess on Twitter or on Facebook. You can also reach her at amyleeburgess99@gmail.com. Don’t be shy!

Hi! Thank you so much for the opportunity to talk with you and share my story!

Tell us about your title featured in this set.
My novella, Vital Signs, is about two paramedics who keep paranormal secrets from each other and the world. Jack Grady can see ghosts – but only ghosts who need him to find their hidden corpses. He gets into lots of trouble doing this as you can imagine since only he can see the ghosts, and nobody can figure out how he knows where to look.

Rosie D’Angelo can heal with her hands. She’s freaked out several of her former partners with this ability, and now keeps it to herself and thinks she’s a freak. She’s afraid to tell her new partner, Jack, what she can do because she doesn’t want to destroy their growing attraction.

Of course events conspire so that they both need their powers to help save each other!

I was inspired to write about paramedics because I absolutely love the old tv show, Emergency. In fact, Jack Grady and Rosie D’Angelo have the same initials as the paramedic partners in the show – John Gage and Roy Desoto.

This novella took approximately one month to write – one really fun month! I wanted a medical title for this novella and Vital Signs covers it on many levels. When you read the story, I think you will agree.

Tell us something about yourself.
I was born in Manchester, Connecticut, but I’ve moved around a lot since. New Orleans was home for nine years until Hurricane Katrina drove me to Houston, Texas. I stayed in Houston for eleven years until I got laid off from my gas & oil industry day job.

Now I live in Apex, North Carolina. I’m still exploring my new surroundings, but it is incredibly beautiful here. What a shocking change from Houston!

Tell us about your writing process.
I like to plan my novels in my head while I’m trying to fall asleep and just after I wake up. I do most of my best plotting between the sheets! I write every day for at least two hours no matter how unmotivated I might feel. Routine really helps!

What would you say is the one thing are you most passionate about?
Helping animals! I adopted two dachshunds from Dachshund Rescue of Houston, and they changed my life. I ended up fostering after that, and I have learned so much from these rescue dogs. I can’t wait to find a day job here in North Carolina so I can foster again. You can’t save every dog, but you can save them one at a time!

When you are not writing, what do you like to do?
Playing with my dogs and exploring my new territory. Oh, and reading and watching Netflix.
If someone who hasn’t read any of your books asked you to describe your story in this set (the elevator pitch!) what would you say?
He can see ghosts. She can heal with her hands. They can’t tell anybody, but when a killer threatens to tear them apart, secrets must be exposed!

Thank you for allowing me to share my story with you today. I hope you enjoy all the fantastic stories in Coming in Hot!

Here we go again! A familiar mixture of compassion and resignation flowed over Jack Grady as he watched the ghost stumble onto the edge of the highway. The figure held solid as any mortal man, but every hair on the back of Jack’s neck rose, alerting his special senses. His tingling nerves paired with the fact no one on the scene noticed the blood-drenched man shambling on the road proved this was no mortal.

The ghostly face dripped blood. Scalp lacerations always bled like a bitch. However, more than a head wound plagued this particular ghost. His left arm dangled uselessly, bone protruding through the skin at the wrist. Phantom blood spattered, then evaporated, on the shoulder of the road as he advanced toward Jack. His face twisted as he reached out his good hand imploringly. He dragged one leg, the jeans shredded and bloodied. The gaping wound in his stomach had probably killed him, Jack figured, as he watched him lunge closer. Punctured by something. A tree branch? The edge of the SUV’s door? Something sharp. His mouth moved but no sound emerged. Not close enough yet or Jack wasn’t concentrating hard enough.

The ghost stared at the wreckage of the SUV slewed sideways on the shoulder of the highway. The mashed-up front end steamed. Jack kept a wary eye out for fire even though Rico and Duke were hosing it down with foam. Fire had a way of erupting, especially when mixed with gasoline.

Jack’s partner, Rosie D’Angelo, knelt by the side of a bloody woman, taking her vitals, which she relayed by field phone to Dr. Winchester at Fairhaven Hospital. Jack glanced down the highway. No sign of the ambulance yet. A police cruiser blocked the two-lane highway, holding back traffic. Several people milled about outside their cars, craning their necks trying to see the carnage. Lookiloos. Jack grimaced. Thanks to human nature, people gawked at car crashes, but that didn’t make their morbid fascination any less disgusting.

The second car, the one that had been traveling the wrong way, lay flipped upside down on the opposite side of the highway. Two shaken college kids stood nearby. The girl, wrapped in a blanket, wept as she swayed back and forth. The boy, the driver, was taking a Breathalyzer test administered by one of the police officers. From the way he tried so hard to stay balanced, he wouldn’t pass. Stupid. Who got drunk at four in the afternoon? College kids and alcoholics. Jesus.

“Help me!” The ghost’s voice floated into Jack’s head. The dead people Jack saw all had one thing in common. Their bodies needed finding. Some of them knew they were dead and led him to their final resting places. Others, like Jack suspected of this ghost, needed help to find their bodies so they could accept their deaths. Telling someone they were dead sucked.

a Rafflecopter giveaway
Posted by Angelica Dawson at 07:19