Hello Humpday, Hello Teasers. For the next few weeks, I'm sharing excerpts from fellow authors in the boxed sets I'm thrilled to be included in. Today, I have Amy Lee Burgess and her novella, Vital Signs. Great name for a medical themed set!

Get a dose of romance, STAT! Preorder for only $0.99!
Featuring NYT, USA Today, and Amazon best selling authors, we're Coming In Hot with paranormal to contemporary, and sizzling to seductive bedside manners by the doctors, nurses, paramedics, and more in this boxed set.
Paramedical meets paranormal in this steamy set filled with shifters, werewolves, vampires, and more!


Amazon - Nook - iBooks - Kobo - ARe - Smashwords - Goodreads
You can also enter to win a Kindle Fire! (or Amazon gift card) 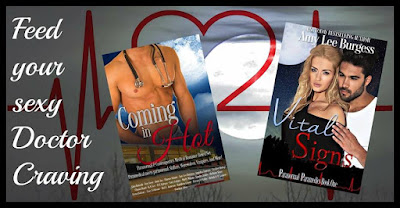 “Do you really not date?” Jack leaned closer, his gaze locked to Rosie’s. “I find that hard to believe.”
“Believe it.” Rosie tried to squirm backward and hit the arm of the sofa. Trapped. She could get up and move to the armchair, but it was way over there and Jack was right here.
“What about serious relationships? Have you had many of those?” Jack inched closer until their thighs brushed. Tingles shuddered up and down Rosie’s spine. His voice thrummed liquid sex. Why had she never noticed before?
“No,” she admitted. “What about you?” Wow. Her voice sounded laced with whiskey. And passion. Dial it down! Don’t ask about his love life! Doing that was a direct path to his personal life, which was none of her damn business. Or at least it shouldn’t be. But, damn, a man like him? His past must be littered with beautiful women. The million dollar question was why none of them were with him right now.
“I haven’t had a serious relationship since Maryann Montgomery senior year in high school. We were going to get married as soon as we graduated,” he said, his thigh pressing into hers distractingly. “Then her father got transferred to Ohio, and I never saw her again. Story of my life. I get to thinking I’ve got something special and fate steps in and says, ‘Oh, no. Sorry. She’s going to drop out of college and move back home. Or decide your best friend’s more interesting.’”
“No way could your best friend be more interesting than you. Unless he was like, George Clooney or something.” Breathing would be a nice thing to be able to do, but somehow all the air had been sucked out of the room. Maybe if she could look away from Jack’s eyes, but, no, why would she ever do that?
Jack chuckled. “No, just a guy with way more money and the ability to hold a job longer than six months. Funny how some women like that stability thing. I’ve never understood all the hype myself.”
“Home is important,” Rosie said. What would he do if she leaned forward and gave his lower lip just the tiniest little nip? “But sometimes we forget people can be home just as much as four walls and a door can.”
“So says the woman who won’t let me drive the squad because she knows every dirt road and byway for fifty miles.” Jack leaned forward so their mouths were so close she could feel his warm breath on her lips.
“I drive the squad, Great Eagle,” Rosie whispered. Oh, what the hell! Nothing ventured, nothing gained. Before her better judgment could prevail, she closed the distance between their mouths and kissed him. Damn! Shock waves of desire coursed throughout her body. When he brought his hands up to cup her face, she thought she might die. Why did he have to be so perfect? She ought to be able to find at least one thing wrong with him. But, no. Nothing he did was wrong.
She nibbled his lower lip, and he groaned, opening his mouth so their kiss deepened. Rosie’s heart hammered. Electric tingles leaped everywhere he touched her. He tugged on the band holding her braid tight until it fell to the floor. Frantically, he undid the plait until he could run his fingers through her unbound hair.
She plunged her hands into his dark hair. So soft and feathery.
Their kiss turned urgent with need. She moved her hands to his hips so she could pull his tee shirt out of the waistband of his jeans and slide her hands up. Muscles. All the damn muscles.
“God damn, Jack.” She groaned into his mouth.
“Right back at you, Rosie.” He gently moved one of her tank top straps from her shoulder and placed his mouth to the bare skin he exposed. Kissed his way to her neck, rubbing one thumb in small circles on the other side of her throat.
She threw her head back, giving him complete access. They shifted so she lay on the sofa with her back propped against the arm, and he straddled her. The press of his erection against her belly produced a dizzying, erotic sensation that spread over her entire body. He pushed her tank top up to her neck, exposing her bra. Thank God she’d decided to wear one of her sexier bras that made the most of her cleavage and didn’t scream Support Only.
He bent to take one fabric-covered nipple between his teeth, and gave it a gentle tug. Rosie clutched at his broad shoulders for dear life. Finding the front fastening, he gave it a twist and her breasts spilled into his waiting hands.
He rolled his thumbs across her nipples, making her squirm, then braced one hand on the sofa arm so he could lean down and kiss her.
“I want to be inside you so bad, Rosie,” he confessed, his breath ragged with need. “What do you want?”
A nagging voice inside her head cautioned her to put on the brakes. He was her partner. This was freaking madness. What happened when they broke up, but still had to work together? God, she didn’t want to regret this night. If only time didn’t have to march onward and every second could be right now, right here.
Opening her mouth to tell him they needed to slow down, she heard herself say in that whiskey-laced passion voice she hadn’t known she possessed, “Please tell me you have condoms.” 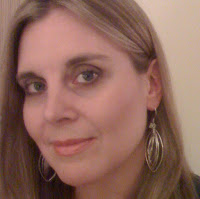 USA Today bestselling author, Amy Lee Burgess, is a transplanted New Englander living in Apex, North Carolina with two dogs and lots of DVDs. Amy has long been a fan and writer of paranormal romance and urban fantasy. Wolf shifters, vampires, dragons, gargoyles, and other assorted creatures can be found living between the pages of her books and within her heart.

Check out all the other great teasers!

Posted by Angelica Dawson at 00:30

Email ThisBlogThis!Share to TwitterShare to FacebookShare to Pinterest
Labels: Coming In Hot, MidWeekTease