I'm so happy to get to take part in Tracy Cooper-Posey's release week blog hop. She is celebrating the release of Blood Stone on September 14, the sequel to Blood Knot which is FREE September14-16 so you can read it before the sequel. So that's free, but we also have a giveaway, of Blood Knot to a commenter who just can't wait until Friday.

Tracy has very active blog, so I asked her a few questions about it. You blog almost daily. Do you ever get burnt out? Where do you turn for something new to blog? 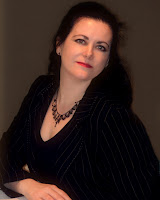 The critical word is almost. I’ve had hiatuses, vacations, spotty patches, highs and lows…At the moment, I try not to post on weekends if I can help it, but sometimes interesting stuff turns up, as I write about interesting historical events, and if they happen on days that fall on a weekend, well…

I’ve been blogging for five years and haven’t burned out yet. I keep switching up the content and topics. Every now and again I clean out the archives and dump them into the article section, too, so readers can access them in a more categorized and tagged way.

I have been tagging my posts since I started earlier this year, but that could be a daunting task with your archive! I like your lingerie feature. Has that been going on long or is it relatively new?

The Lingerie series is a new, short series of posts. I do a lot of short run series, especially around anything to do with sex, sexuality, romance, the romance genre, and my personal favourite: MMF romances. I also have a lot of regular posts that turn up over and over again: Pulse Pause Moments, It’s Just a Job (Paranormal species defined), Top Posts of the Month, and What I’m Reading.

Ooh, I'm a fan of MMF too. Your romance genres run the gambit! Do you have a favourite?

Oops, I think I just spilled the beans on that one, didn’t I? MMF Romance…which sort of straddles a lot of genres, doesn’t it? But at the moment, I’ve kept mine strictly in the vampire romance sub-genre.

If I was to pick a favourite genre (I mean, let’s be precise!), oooh, that’s difficult! I think I would have to narrow it down and say Urban Fantasy Time Travel. Which is really a cop-out, because it lets me write in four different genres at once: paranormal, urban fantasy, romantic suspense and historical.

Hehe, cheaters can prosper! That is quite a library. How many books have you published? Do you find it has gotten easier or more difficult over time?

I’ve released 43 titles to date, and number 44 is coming up very, very soon. (BLOOD STONE). “Easier” or “harder” really depends upon what area of publishing you’re looking at. To a degree, the writing process has become easier simply because I’ve repeated it so many times. I have check lists for plotting, writing and my own editing processes that help push me through a lot of procrastination stages and second guessing that I might have done when I was less experienced. Also, now that I’m self-publishing, it’s easier setting up publishing dates, publishing schedules, and “selling” to publishers, of course, is no longer an issue.

On the other hand, publishing itself has become a lot harder in many respects because 100% of the responsibility is now on my shoulders. There’s the fiscal responsibility of hiring a cover artist, consulting with them and having a decent cover produced, plus all the technical labour of formatting and producing the multiple versions of ebooks for the various ebook platforms and retailers that sell my ebooks. There is at least ten times the paperwork to keep track of, especially as an indie publisher who was born in Australia, living in Canada, publishing books in the United States.

Plus there is the responsibility of simply producing a quality product. While legacy authors are measured by the best selling authors and tend to be able to float, to a certain degree, because readers have an expectation (that is not always correct) that legacy publishers and authors produce quality products, the reverse is unfortunately true of indie authors – we are judged by the crap, the stinkers and the discards that get published anyway, and readers measure indie books with an expectation that they will be badly written, full of typos and mediocre quality. Indie authors have to be more entertaining and produce a better book than legacy authors to win the approval of readers, and I carry that knowledge in the forefront of my mind every time I produce a new book. That makes my job very challenging indeed.

You make me appreciate my publisher even more. I don't know that I would have the confidence to do all those things on my own. How do you keep in contact with your readership? Are most of them subscribed to your blog?

I have a large subscription base, yes. There is a large number of readers who read via normal RSS feeds, but the biggest chunk of my readers by far subscribe through the RSS email feed, so my posts reach them via their email inbox, like a newsletter. I also have a very large newsletter subscription list, but I send out my newsletter infrequently – usually when there’s something super exciting to talk about, like the launch of a new book, or I’m on The Tonight Show! My blog feed also goes out to Facebook, Twitter, Goodreads, Amazon, Yahoo and a few other places.

Definitely got your social media covered. contemplates a mailing list You reference some older movies and TV shows. Do you have any current favourites?

Oh yes! I just don’t watch live TV, so I tend to be behind by at least a season, while I’m waiting for a show’s season to finish. I love some of the TV dramas and the fabulous story lines that get told on some of the non-big-four production channels, like HBO, etc. True Blood, Game of Thrones and Fringe would rank as my top three at the moment. I’ve finally caught up with NCIS and I’m waiting to find out what happened to Tony and Ziva in the elevator after the explosion in Season 10, and if they don’t get together this season, I think I’m going to stop watching in protest like some of the long term fans have been hinting they would do, too. Lost Girl is another interesting series that has dropped my jaw a few times – especially with their menages. Big Bang Theory is pure geek fall-down funny. Then there is the king of kings of all series: The BBC’s Sherlock. I am a card carrying committee member of the Sherlock Holmes Society … well, I used to be, a long time ago. I’ve published two Sherlock Holmes books. I’m just a tad nuts about the consulting detective. This series hit me like a depth charge. (I raved about it at least twice on my blog, too. Here and here.) They’re not producing the third season until 2013!!! But I remain faithful…. Benedict Cumberbatch, who plays Sherlock in the series, is the new Khan, in the rebook Star Trek sequel coming out in May 2013. Oooh! As for movies, well: Star Trek II, of course. And Skyfall, the new James Bond movie, coming out in November. Have you seen the official trailer for it? It looks deadly. And of course, The Hobbit, as I am a Lord Of The Rings freak. I’m one of those people who reads the book once a year – or used to until the movie came out. Now I watch the extended movie once a year, around Christmastime. And yes, I wrote about that, too.

I don't have cable anymore either, so I watch via ITunes or Netflix. Wow, you've definitely given us a lot to look at and think about. Leave a message for Tracy, or a question, to be entered in the draw for a free copy of Blood Knot and make sure to check out her latest release: Blood Stone.

And if you're looking for me, I'm on Rosanna Leo's and Phoenix Johnson's blogs today with a post about choosing a mate for eternity, something I'm guessing Tracy's characters have to do as well.
Posted by Angelica Dawson at 06:57