Jumping back into the saddle. And here to help me is Aaron Dennis. He is here to tell us a little about his writing experience and his book series.

You write hard sci fi. Not just hard in the extra-terrestrial sense, hard in the researched plausible science sense. How much work did that take? 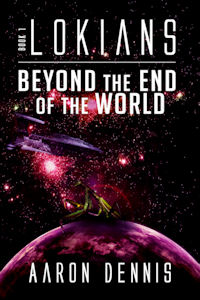 Hours... many, many hours of research and double checking. It was actually quite a bit of fun. While I've always had a propensity for theoretical sciences, I had an opportunity to play with basic knowledge. I bought an astrophysics textbook and read through it, downloaded several term published term papers, and existing studies. Also I watched some youtube vids on magnetics and downloaded available schematics on rocket engine design. Naturally, plugging it all in the story would have made it more educational and less thrilling, not what I wanted, so I just alluded to facts.

Do you have any science degrees or other academic learning that you draw on?


Nine years in and out of college. Mostly I studied psychology and conservation. In order to enter grad school I had to take Trigonometry and Pre-Calc. That's my extent of formal schooling. Sadly, I do not have any degrees. This does not curb my enthusiasm for learning. If and when I decide I'll buy a textbook or download some current study just to keep myself entertained. I know most people don't think of that as fun and I know most sci-fi novels don't incorporate as much science fact but it's time for something new.

It's only more impressive that your self-taught. I think fiction resonates better when it has that kernel of truth, a kernel found in your research. You share your fanfiction alongside your original fiction. Do you fear any action from the creator whose work you base your fanfiction on?

First, allow me type (I can say it but only my laptop will hear me), my fanfiction is based on a video game series, The Elder Scrolls by Bethesda/ZeniMax. I actually tried to obtain consent to publish but was denied. I had a few email exchanges and they stated fanfiction was absolutely OK so there's no problem there.

That's good to hear! How would you respond to fanfiction written about your work?

Well, well, what a nice question. I would love, and hope that one day, once my series is established, the Lokians series that is, someone will write fanfiction. Best of luck to them. They will never be in my head and will never have the same ideas to draw upon. This is not meant to sound condescending. I look forward to someone sharing what they feel the characters, universe, etc., might do.

I think I see what you're saying. They will never write what you would, but it would be interesting to see what they do. How did you find and choose your publisher?

I just stumbled over Eternal Press. I spent many weeks submitting my story to those who accepted unsolicited manuscripts. No one accepted, or they had yet to mail letters declining. I also submitted to Literary agents. Too bad for them now, LOL. I think I found Eternal Press on a list of smaller publishers. I was glad to work with them as opposed to a large or mainstream publisher as they tend to take some creative control. Furthermore, I don't really believe they take on real authors. What I mean is, I think they hire Literary majors from colleges, stick them in a room, order them to write a novel based on some idea the publisher concocts, then take the book, snap a picture of a model, create a false backstory, and finally sell it to the public as the work of a brilliant new author. You want to see brilliant new authors? Check out some of the indie published books wherein the authors double as promoters, editors, and reviewers all at once. That's real talent and commitment.... but I digress. What was the question? Oh right. I found Eternal Press on the web.

Hmm, ponders authors crammed in little rooms, not impossible, but somehow I don't think that's what they do. You feature a number of other works by your publisher on your blog. Do you get copies to review or are these colleague relationships?

A lot of us are brand new and only debuting. We're all very kind to one another, and very sociable. I had no problem both requesting them to review, interview, or schedule a blogstop for my novel and vice versa. It's so much fun to read something totally ingenuitive or something from a genre I would not normally read. I'm really glad to be working with everyone at Eternal Press and the sister site Damnation Books (I have a second novel coming out in September with them). They respond to Email in a timely fashion, they help to promote, they assist in learning their particular peculiarities. I honestly feel as though they care about their books and subsequently, that inspires us as authors to care about one another. At the risk of sounding cliche, I think it's important for us to stick together. It isn't exactly a safe world out there... literally speaking... get it? Literally? I crack me up.

groans quietly at pun. I know what you mean about having a working relationship with your publisher. Mine, Naughty Nights Press has been wonderful about getting back to me, not that we haven't still had some clashes, but I think it's better than I could have expected from a large publisher. If an agent approached you and wanted to sign your series to another publisher, would you accept?

No, I would not accept. Did you know that advances paid by a major publisher come out of the royalties until the publisher has made their money back? What's the point? My stories will sell because they're good and geared for a new generation. I might be mistaken in my assumption, as I have no relevant data to prove otherwise, but I think a major publishing house has too much control over their authors. Eternal Press lets me spread my alien-alloy wings... so to speak, er, type.

Where can we find your book? 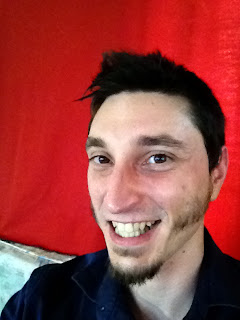 Eternal Press and Amazon have pages for purchase.
Facebook
@authaarondennis
I have a few other stories floating about the aether. I'm working on getting a website but also working on 7,000 other things sooooo, hopefully I'll get it up and running soon.
Well thanks so much for having me. I always love answering questions about myself or my books. I think all too often we forget that authors are entertainers and should promote themselves more than their books. If people like me then they'll be more likely to check out my work... or maybe I'm wrong what do I know. LOL... oh you've been great to put up with me.

*chuckles* Thank you for answering my questions. I wish you all the best with your current and future releases.

Have a question for Aaron? Leave a comment!
Posted by Angelica Dawson at 06:17