Release Eve - the day before awesome 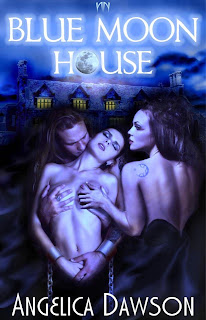 Today I have wonderful news to share! Tomorrow Blue Moon House will be available on Amazon, Smashwords and at the NaughtyNightsPress Estore. By Monday or Tuesday it should be on Barnes and Noble as well (takes a little longer to get through their system). So if you've enjoyed great excerpts like this, or this, or this, then you really need to get the whole thing. If you haven't read any of the excerpts (well, click the links!) then here is a blurb to whet your appetite:

Julia has the chance to become one of the vampires of the Blue Moon House. Before being accepted, however, she must prove herself to each of the vampires, and each has their own exacting cost. Ranging from lesbian, to being forced, to physical torture, she is pushed to her breaking point time and again. Eventually her perseverance pays off and she crosses from submissive to dominant and vampire.

If you prefer the short stuff, I have a second release tomorrow (I know, crazy). NaughtyNightsPress is releasing their third installment of Campus Sexploits and this one includes a story by me! Here is the blurb for the anthology followed by Synopses from each of the authors.

Liz discovers that her roommate, Laura, regularly visits their neighbor in the dorm due to a very special talent Chris has when it comes to a woman — any woman. Though Laura encourages Liz to try him out, and Liz is intrigued by the idea of the experience, she has a boyfriend.
Liz runs into Chris at the cafeteria and asks him about his "special" talent. Liz discovers the amazing talent of Chris' magical hands and now knows exactly why Laura keep going back for more.

From Tanith Davenport we have Assume the Position:

Tamar Brennan is depressed. Instead of going to a party with her girlfriend, she is freshly dumped and stuck indoors with her roommate for company — her very hot, also gay, roommate Elyse,. Alone in their room drinking wine, the conversation turns to Elyse's yoga training. The sight of Elyse's slender body moving through yoga poses is too exciting for Tamar to resist. Elyse is willing, but can Tamar convince her to break her just-friends rule in the cold light of day?

From Scarlett Black we have The Librarian:

Ms. Barnes is the University campus librarian. If a student is falling behind or if a Professor needs research assistance, she will gladly lend her expertise. She likes giving personalized attention. Wearing stiletto boots and short skirts, Ms. Barnes will fulfill your every fantasy and more. Don't be shy, step right up and ask her for help. She's more than happy to hold a specially tailored study session with you.

And mine is The Highest Bidder:

Laura is attending a fundraiser bachelor auction. Although she plans to bid on her casual partner, when another man is completely neglected by the bidders, she snaps him up instead of waiting. The Highest Bidder wins big.

And you get ALL of those for $2.99... actually, because you're on my blog, you get it for less! Use my coupon code for another 25% off! My code is in this email (check the red letters/numbers).

Thanks for celebrating my release with me. Here are a few of the blogs I'll be hopping around this week:

Posted by Angelica Dawson at 00:15