Be this a witch?

This week I am featuring a tease from Arla Dahl, and boy does it have punch. 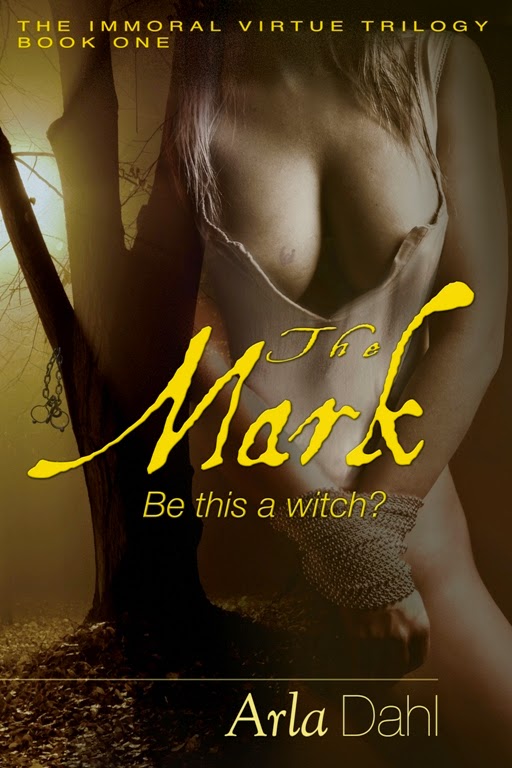 He watched her closely as she cried, naked and folded on the floor. Each ragged breath jostled her breasts, the same as when they had been struck by the crop. Her responses had baited him, challenged him to strike harder, and with each flick of his wrist, she had cried out, moaned, filled the space between them with the scent of her arousal. A scent that hovered still.

Engorged past pain, he took an awkward step toward her, then stopped and cursed need for its persistence. He dared not move as a torturous, cock-twitching wave of pleasure and pain all but emptied him. He breathed through it, fought for at least one mere scrap of control.

He turned away from the sight of her, forced himself to focus on the tasks ahead. He set a kettle of water to heat on the hearth. Without a glance her way, he strode to the table and moved the candles he had set there to a ledge on the wall above it. Better to prepare the table now, while she did not watch, than to have her grow fearful and resistant as understanding dawned.

He took a handful of leather strips from a pile on the ledge and chose four according to length. He looped each through iron rings mounted at the table’s four corners, then, with eyes closed, sat back against the table’s wide edge and breathed fully.

Slowly, finally in full control, he looked at her and saw only an accused. “Abigail.”

With a gasp, she scrambled to her feet. Sniffed back tears and awkwardly tried to block her breasts and her sex from view with her arms, her hands.

He waited for her to settle and when she did not, he folded his arms across his chest and tipped his head in challenge. “Only those with the mark hide what they have.”

It seemed a struggle for her to lower her arms and clasp her hands behind her. Finally she did. A brief moment later, she drew a long breath and lifted her chin.

Though tempted to commend her composure, he refrained. “Take the crop from the mantel and bring it here.”

She inched toward the mantel and grabbed the crop. His gaze scanned her lovely body as she moved toward him, her breasts and hips swaying with each step. Her hand trembled as she held the crop out to him. When he was through with this examination, he would lay her beneath him and make her whole body tremble. He would forget the women who waited, the townsfolk and all, and see that her every inch was covered in his scent, his seed, for surely a joining with her would wring him dry.

He set his hands in his lap lest she see her effect on him, then inclined his head toward a spot on the table. “Lay it there.”

Her hair brushed his shoulder as she set the crop beside him. A slight curl lingered there as she turned and lifted her gaze to his. He fondled the strand, marveled at its silken texture then arranged it in front of her shoulder just so, grazing his fingertips down to the end where it reached her breast. His gaze traveled the path of his fingertips – over the tops of each breast and down the valley between them.

Her nipples hardened as his gaze and fingertips touched on them. He pressed a thumb to one, casually rubbed it until it hardened further, watching her eyes the whole time. They fluttered closed in immediate response.

He dropped his hand from her and her eyes slowly opened, then widened as if surprised by her own responses. His smile formed on its own. He tamped it down, pleased at her desire to obey, warmed by her inability to do so.

“Go to the chest,” he said, and pointed to it. “You will see two amber vials. Bring them here.”

When she turned, he received his first rearview of her. He weighed the sight, imagined the soft white flesh of her rump filling his hands, though not quite spilling from them the way her breasts had. He would mold them, knead them, test them for sensitivity. He would spread them wide and examine the tight bud hidden between them.

Both loving and hating her effect on him, he grasped his arousal through his breeches, squeezing tight as if to deflate it merely by strength of hand.

She knelt daintily and leaned into the chest, offering a new view of herself with splendid abandon. He squeezed himself harder. Breathed deeply until the pain subsided and only a sweet throbbing ache remained.

He palmed the crop, then laid it in his lap when she turned back to him.

“Set them here,” he said pointing to where the crop had just been. “Then lean forward. Flatten yourself to the wood and grasp the far end of the table. Widen your stance, Abigail. And do not let go.”


Arla Dahl is a lover and avid reader of all things sexy and suspenseful. In her Immoral Virtue Trilogy, the horrors of the 17th Century witch trials are exposed, examined and reversed. Deeply moved by the viciousness of times, Arla created stories that twist an already twisted history, and turned the very thing which labeled the accused susceptible to the temptations of evil into the one thing that would set them free. Lust. Follow Arla on Facebook, Twitter and Google+, and read further tales of the witch trials on her blog, Notes from Arla.