For your reading pleasure, we'll be featuring each author with a story of her choice for the next few weeks. Some will include interviews, and all will include excerpts. Today's featured author are Gina Kincade and Kiki Howell. 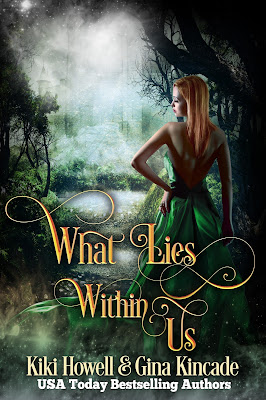 After receiving a letter from an aunt she never knew existed, Kyna Hughes travels to Ireland only to find out that her whole life has been a series of well-orchestrated lies. Suddenly, this poor girl from the foothills of the Alleghany Mountains is thrust into a life of not only the wealthy and affluent, but of dark magic and secret societies. As Kyna learns of the magic hidden inside her, purposefully stunted as she grew up for her protection, she must now battle mystical hauntings which are the result of curses while getting a crash course in utilizing her powers. Kidnappings and satanic weddings become her daily events as she struggles not to lose her heart to one of two men—a former Navy SEAL hired to protect her or a wizard hired to train her. Soon she will realize just how true it is that “What lies behind us and what lies before us are tiny matters compared to what lies within us.”

Ominous fanfare greeted her arrival in County Monaghan. Lightning shred the fall of dusk as a grisly storm surrounded the car. Her every nerve vibrated with electricity; the well read letter in her hand trembling in the heat of her clenched fist. Her last minute research of this part of Northern Ireland had not done the place justice. Beauty, that of a rolling and majestic nature even in the dark downpour, stole her already shallow breath.
The thousand slices of light tearing through the sky reflected in the grey water beside the road. Kyna perceived the ominous black shadows cast by the trees as decrepit, arthritic fingers reaching out for her from the heavy flowing stream. A resounding flood of sound, deep undulating thunder, made her curl her body in on itself as she angled away from the window streaming with tears from the sky. The squall so violent, she imagined the glass would shatter. Never one to cower, she swore in a whisper to herself. Ever since she’d landed in Ireland, someone or a something, specifically an indescribable dark presence, followed her. Sure, it made no sense, but she couldn’t convince her over-stimulated brain and racing heart.
Trying to swallow despite the dryness in her mouth, looking straight ahead, her gaze following the peaks and valleys of the deserted stretch of road, she sought a moment’s peace from the raging internal war. Deep breathing exercises had yet to award her tranquility. This unexpected twist in her life over the past few days propelled her toward her wits end. From the moment she’d pulled the cream-colored, gold-trimmed envelope containing the correspondence from her mailbox, every part of her being had been altered in some way. From bursts of indefinable energy making her want to run a marathon, to unbidden ideas reminiscent of familiar dreams, to a feeling of having a sixth sense that warned of impending danger, she warred within to maintain some semblance of composure. She didn’t understand her own body anymore, but had not the time or the mental capacity to analyze the abrupt changes as she traveled.
Erratic thought patterns plagued her instead, a barrage of unanswered questions. Prior to that fateful letter, she’d just been a girl from the foothills of the Alleghany Mountains, having lived her whole life in White Sulfur Springs, West Virginia. Her mother’s confession of her true heritage came when confronted with the communication, the damned letter, scrolled in a shaky hand, from an aunt from Ireland she never knew existed.
Apparently, Kyna was more Irish than she knew, as in born in Ireland and adopted through the Irish Mafia into the United States. The father she barely remembered, a man who’d died in a mining accident when she’d been barely five years old, had ties to the organization. She’d been a black market baby, for the love of all that is holy! The adoption had born conditions. Telling the poor child of her adoption a deal breaker, punishable by death. None of these random facts brought about feelings of safety and security as she traveled abroad to meet her aunt on her biological mother’s side.
The letter, the freaking destroy-a-simple-life letter, ranted on for two pages of a heartbreaking tale.