For your reading pleasure, we'll be featuring each author with a story of her choice for the next few weeks. Some will include interviews, and all will include excerpts. Today's featured author is Heather Marie Adkins. 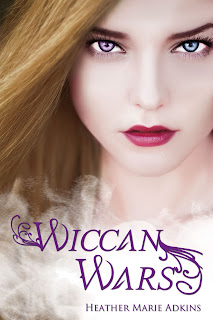 The line between light and dark has never been so unclear.

Ever O’Connell prides herself on being a good Wiccan, and her coven follows the path of the Goddess with love and light. But the “dark” witches in school—the BlackMags— keep pushing her toward the edge, until Ever finally finds herself at war.

Cade Bourdain inherited his father's thirst for power, drawing him into darker areas of magick. Despite his dislike for the “Fluffy Bunny” Wiccans, he feels an unearthly connection to Ever.

When the two strike up a secret relationship the real magic between them is ignited, generating a power that a dangerous warlock yearns to take for his own. Ensnared by the warlock, Ever and Cade’s conflicting covens must work together despite their differences—or else be destroyed by a common enemy.

The screen door creaked on its hinges as he swung it open and knocked on the front door. His first knock shoved the door in, revealing a cool, dim hallway.
Startled, he propped the screen open with his shoulder and grabbed the handle, holding the door still as he knocked again. “Hello?”
No response.
“Anyone home?” Cade pushed the door open a little more, listening intently.
Still nothing.
Should I go in? he wondered, teetering on the threshold. On the one hand, barging into someone’s home — especially someone who wasn’t necessarily a friend — wasn’t cool. On the other, what if Ever was home alone and something had happened to her?
That thought alone made his decision. “I’m coming in!”
He shoved the door open all the way, the edge dragging across the floor as if it weren’t fitted properly into its frame. The screen door slammed shut behind him, the sound an obtrusive crack in the hushed silence.
“Ever?” Cade walked forward, his eyes darting around the foyer. An opening to his right revealed a battered dining table and chairs, guarded by an impressive sideboard and a painting of a meadow. To his left, a living room with stuffed couches and no television, but a nice marble fireplace that took up nearly an entire wall.
“Hello?” Cade passed through the doorway beside the stairs and found himself in the kitchen. The oven was on, ticking into the silence. Something smelled gingery and delicious. He hadn’t realized how hungry he was until assaulted by the scent. He stepped closer to the oven, curiosity drawing him to peek into it.
“I should really leave the dogs inside when I’m home alone.”
The voice, coming from behind him, startled Cade so badly he jumped, knocking over a pitcher resting on the counter. Tea gushed across the Formica and waterfalled to the floor
Ever stood in the kitchen doorway, looking pale and wan with a square of gauze taped to her hairline, but sporting an amused smile. “Yep. Should definitely leave the dogs inside. Maybe they’ll keep out snooping intruders set on spilling my sweet tea.”
“Damn, Ever. I’m sorry.” Cade grabbed the pitcher and placed it in the sink, then glanced around for a towel. “The front door was open, and you didn’t answer. I thought something might have happened to you. I didn’t know how badly…” His voice trailed off as he eyed the bandage on her head. “Did he really hurt you?”
Ever shrugged, gliding into the kitchen on bare feet. “I had to get stitches. But I’ll survive.”
Cade stood by helplessly as Ever opened a drawer and extracted dish towels for clean up. As she bent to wipe up the floor, Cade jumped forward. “No, let me. I made the mess.”
That damn amused grin again. “Alright. I’ll get the counter.”
A minute passed in awkward silence as they dried. Cade was crouched so close to Ever’s bare legs he could feel her heat. She smelled good, like something earthy, and the curve of her anklebone was fascinating. He stole glances at her smooth, golden calves, muscles clenching as she swiped at the spilled tea. He couldn’t help but imagine what it would feel like to reach out and touch her, to slide his fingertips up her skin, over her knee; to press his lips to the softly rounded curve of her thigh beneath the hem of her shorts.
“Why are you here, Cade?”
The question caught him off guard. He lurched forward, dish towel sliding through the puddle of amber liquid. “Um, what?”
Ever looked down, raising an eyebrow.
Horrified, Cade realized his fumble had pushed a tidal wave of tea over her foot. Another part of him noticed her tiny toes, painted a vivid shade of blue, and the silver circlet on her left second toe. Even her feet were cute.
“Sorry,” he said, avoiding her gaze and her smirk.
“It’s okay.” She lifted her foot behind her, seamlessly leaning backwards to wipe it off with her own towel.
Cade found himself mesmerized by the way her back arched. She had a neck like a swan, all grace and ease. He’d never been this close to her, close enough to notice all the little things most people ignored, like the beauty mark just beneath her jawbone or the perfect hourglass her curves made in that outfit.