For your reading pleasure, we'll be featuring each author with a story of her choice for the next few weeks. Some will include interviews, and all will include excerpts. Today's featured author is Liz Gavin. 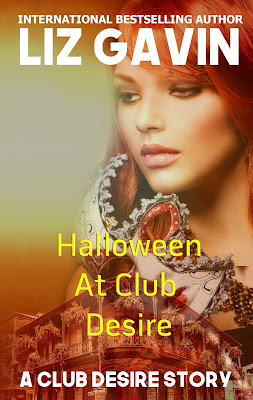 One night of passion
Clara Hervaux wants to go back to New Orleans and celebrate Halloween with Marcel at Club Desire. But things are complicated now that the movie star is the target of some crazy fan who’s been threatening her. How can she ditch the bodyguards that follow her around? Is it safe to go there alone? Will she be able to keep her escapades at the club as a secret? Or will she disappoint her favorite ghost and fail to spend Halloween night with him this year?

Sprawled on a big, soft couch, I was reading some kinky novel in the library, my favorite room of the house. Henry stormed in and threw a bunch of sheets of paper on my lap. They were covered in words and letters cut-out from magazines and newspapers, which made them look like something out of an old-fashioned, film noir flick. You know, those classic black and white films where some Bogart-looking actor plays an anti-hero, usually a cynical private detective. He’s approached by a mysterious femme fatale who wishes to hire him either to find out who’s after her or to help her get rid of someone.
“What’s that, sweetie? The studio head’s idea of a clever pitch for a remake? Or did the printer break down?”
“Very funny, Clara. They’re the letters I’ve told you about. There’s a new one every day. Sometimes two. We should go to the police.”
“Nonsense! Forget about them.”
“I can’t. You’re in danger.”
“You’re overreacting. I’m not in danger. Throw them away. Burn them. I don’t care what you do, just get rid of these letters. They don’t mean anything.”
“But, they say they’ll take you away. They go into a lot of details about what they’ll do to you once they get you. I must confess I have nightmares about some of them. We can’t sit on our hands and do nothing.”
I grabbed a few of them, skimmed them over and showed them to my overzealous assistant.
“Here, darling, look. They say they’ll teach me a lesson because I’m a slut who ruined George Clooney’s marriage. You know I didn’t wreck George’s marriage in real life. My character had an affair with his character in a damn movie. Why would I worry about these letters, for crying out loud? They’re a load of crap.”
“Because whoever is writing them is clearly insane, that’s why. There’s no need to be afraid of mentally healthy people.”
I petted the couch beside me. After hesitating for a couple of seconds, Henry sat beside me and I ran a hand over his muscled thigh.
“Relax, will you?” I kept stroking his leg as I spoke softly in his ear. “I’m not afraid of this lunatic. I don’t want to lose my precious freedom over something so ridiculous. And that’s what’s going to happen if Peter finds out about these threats, you know.”
I kissed his neck before tracing his ear with the tip of my tongue. He shivered, but went on talking, although his voice sounded throaty.
“As your manager, that is his job. Besides, I saw somebody following us in a tinted-glass SUV the other day.”
Henry’s breath was choppy by then, which was an excellent sign, since I had been trailing soft, open-mouthed kisses up and down his neck, along his tightly set jaw. I nibbled his earlobe while he stroked my inner thigh, under my short skirt, until he reached its top.
For more from Liz Gavin, visit her on the web
Amazon Author Page
Facebook
Twitter
Website
Blog
Book Bub