It’s hard to pick a favorite mythical creature. As a paranormal author, I LOVE THEM ALLLLLL. I’ve written books about the fae, vampires, werewolves, ghosts, witches, and demons. Before it’s all said and done, I’ll have run the gamut of The Encyclopedia of Mythical Creatures.

But I guess if I have to choose, I’d always fall back on witches. Not the Wiccan-based, Circle-gathering type like me, but “Hollywood” witches. The ones who can conjure flame in their palms, manipulate real time and space, or use wands to do, well, anything (hey, Harry Potter, I’m looking at you.)

I don’t think there’s a limit to what witches can do. This world hurts and it burns and some days, it doesn’t feel worth existing in. When I sit down and write about witches who have the real power to change the world, it brings me hope.

Not that it could ever be more than fiction. Just hope that magick, however small, does exist, if we only know where to look. 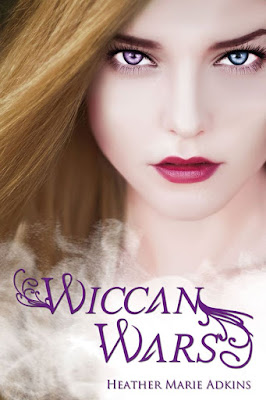 Ever O’Connell prides herself on being a good Wiccan, and her coven follows the path of the Goddess with love and light. But the “dark” witches in school—the BlackMags— keep pushing her toward the edge, until Ever finally finds herself at war.
Cade Bourdain inherited his father's thirst for power, drawing him into darker areas of magick. Despite his dislike for the “Fluffy Bunny” Wiccans, he feels an unearthly connection to Ever.
When the two strike up a secret relationship the real magic between them is ignited, generating a power that a dangerous warlock yearns to take for his own. Ensnared by the warlock, Ever and Cade’s conflicting covens must work together despite their differences—or else be destroyed by a common enemy.

The line between light and dark has never been so unclear.
Find more from Heather Marie Adkins here.