Surrender Her Inhibitions by Nicole Morgan
Three years ago Sophia Hunt was on the tail end of a bad break up and in a vulnerable and confused state of mind when she crossed paths with the sexy and seductive J.T. Mastrantonio. Stuck in a rut and no longer satisfied with his successful life, J.T. finds an unfamiliar ache when the scared girl who ran out on him years earlier walks back into his life. Though time is not their side, Sophia is faced with the realization that her biggest fears and greatest temptations are one in the same. And only J.T. will be the one who can get Sophia to surrender to her inhibitions.

Make Believe Submissive by Daisy Philips
When the Kinky Book Club relocates to the restaurant Maggie owns, she's fascinated by the D/s
lifestyle. When they offer her a chance to visit the club, she talks her fiancé Rick into going, thinking it will be fun for a night. Rick gave up the lifestyle when he fell in love with a vanilla woman. Maggie may be playing the role of a submissive, but he is not pretending to be a Dom. Will their visit to Club Hades reawaken a need he thought he'd buried? Can Maggie change from being a make-believe submissive to the real deal?

Broken by Julia Sykes
Gwen may bartend at Dark Grove Plantation BDSM club, but she sure as hell doesn’t participate in the kinky acts going on around her. Not anymore. She’s been hurt too many times before. But everything changes when sexy Dom Damien shows up at Dark Grove and locks his sights on her. He senses her submissive nature and is intrigued when she rebuffs his advances. Determined to take on the challenge, Damien resolves that Gwen will submit to him, no matter what it takes. Can she resist the unbending Dom who is determined to help her heal? Or will she remain broken?

The Sub That Got Away by Amy J. Hawthorn
Dr. Ember Ross dedicated her life to caring for her patients, always putting her needs last—including her need for submission. Royce Damron has everything he could want in life. The only thing he lacks? The perfect sub. When mutual friends use a new BDSM dating site to set them up, a clueless Royce takes things one step further, intending to keep their encounter an anonymous one-night stand. Unaware the woman he’s spent years pining for waits beneath the hood he insisted she wear, will he miss the sub that got away?

In His Hands by Raven McAllan
In Monsoon season in Hong Kong, anything can happen…Even so, the last thing Caness Clacher expected was to meet a Dom. The very man who made her want to sink to her knees and say, ‘Yes, Sir’. Unbeknown to her Patrick Lim had waited a long time to claim Caness as his sub. Without electricity and with a monsoon raging, it’s time to explore their desires. Will the elements work in their favor or not… Only time—and a scene—will tell.

Indulge by Sherri Hayes
Logan Mattson has been dating Lily Adams for a year and he wants to do something special for their anniversary. What better way to celebrate than to take her away for the weekend and indulge in all her kinky desires?

Submitting To Temptation by Jan Graham
Accepting a positions at her brother’s law firm seemed like a great way for Susan to get back on her feet after a nasty divorce. That was until she met junior partner, Blake Daniels, a man who personifies everything Susan ran away from when she left the BDSM scene years ago—Dominance. Blake is a patient man, and it’s a good thing he is because waiting for Susan Dean is driving him to distraction. Susan is a submissive, he’s sure of it, but getting her to admit that fact is harder than he envisioned. When Blake decides it’s time to make his move, Susan has no option but to admit her true nature and submit to his tempting ways.

Fire and Ice (An Excerpt from KNOTTED) by Juliet Braddock
What happens when a blizzard immobilizes Manhattan on Valentine’s Day…and a sassy little sub is stuck in her Dungeon with her beloved Dom? With candlelight and a roaring fire to keep them warm on this frigid afternoon, sparks fly between Maxine and Drew as he attempts to cool her down with a bit of tantalizing tenderness…

Yes, Justin (Expanded Edition) by Michele Zurlo
After fifteen years and two kids, the romance has fled from Trish’s marriage. When a friend introduces her to BDSM, she decides it’s what she wants—to have her body and soul mastered by a man who is completely focused on her. And that’s not her husband, whose life revolves around his career. Justin isn’t shocked when he finds out his wife is planning to cheat on him. They’ve been
drifting apart for years, and he hates it. He’ll carry out her kidnap fantasy, fulfill her desire to be dominated, and force her to confront the reasons she wanted to be there in the first place. 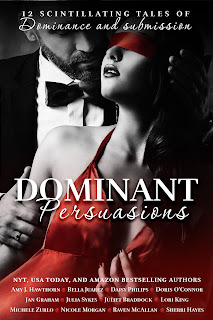