It's not a very sexy carriage, but Jocelyn finds herself in a strange juxtaposition where her sexual master is her servant and carriage driver. These seven paragraphs are from Blue Moon House: Kitten. Okay, I went over by one, but the eighth is the punchline.

How does a twentieth century woman take back control over her own body? By giving that control to the right man.
What if you could have limitless sexual pleasure, at the price of your own blood?
Where does the girl who has done it all go when she wants something new?
Jocelyn considers herself sexually experienced, a leader and manipulator. She is looking for the next challenge. The rumors surrounding Blue Moon House sound like just the thing she's looking for. Losing her roommate to marriage, she needs a new place to stay. Hoping to find both in the same entity, she follows the rumors to their source and finds much more than she bargained for, beginning with a discovery that defies her biological science background–Vampires. 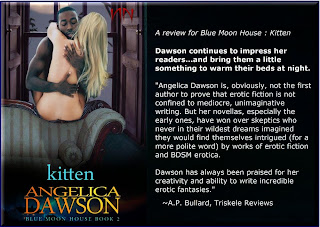 Closing the door behind her, Jocelyn whirled on Will, who held her steamer trunk by it's two large handles. "What are you doing?” she asked, her voice nearly screeching.
He set the trunk down and laughed. “Helping you move in, of course.”
"How is it you are here during the day? Doesn't that...” she gestured at him, lost for words. “Isn't that bad for vampires?”
"Bad, yes.” He took off his cap, and in the lamplight Jocelyn could see that his cheeks were much pinker than she remembered. “It burns, but it's nearly gone, and it would be less odd for me to move you at dusk than after dark.”
She couldn't argue with that, but started to when he lifted the trunk again. “Isn't that heavy?”
He laughed hard enough to drop the trunk to the floor and braced himself on it. “Heavy. Even when I was human this was only barely heavy. I had to carry much more, much farther than down your single flight of stairs. But now?” He laughed harder. “I could carry three like this without strain.”
Jocelyn frowned. “Well, I didn't know that,” she snapped, ripping her hat from the stand that belonged to the suite. Pinning it in her hair, she opened the door forcefully. “Don't break anything,” she said haughtily. “I'll have you whipped.” The imperious effect was ruined by her snort. His echoed.
"You will pay for that,” he warned her, following her down the stairs.