#MidWeekTease - Beyond The Veil - Not Your Bitch 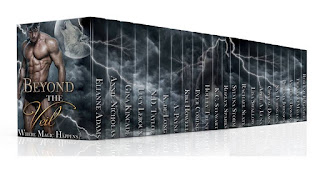 Today I'm sharing a tease from Not Your Bitch, my own story in this box set!

Franklin was collecting Wash tonight, leaving Linc to make his way into the treeline from his parents' yard. He hadn't felt quite right all night. It wasn't the moon, although that didn't help. It was a sense of foreboding. Something bad was going to happen.
Once the change had finished, he found his cousins. Before they’d gone far, he turned back toward the university, to the houses on frat row.
“Lincoln, where are you going?” Adam asked.
“Party at Pi Beta Psi.”
Adam barked a laugh. “You can't go.”
“I know, but my bitch is.” He howled. That wasn't what he'd meant to say. He'd said Zoe, but he heard it, and so did Adam, as bitch. “No. No, no, no. She not my bitch. She's my bitch.”
Adam laughed again.
“Fuck off, Adam,” Franklin said, catching up to them, Wash in tow. “Go play with Washington.”
Adam didn't bother arguing and ran to nip Wash's tail.
“She's not my bitch,” he told Franklin in confusion.
“I know. My bitch is safe at home tonight. It's not the same, Lincoln. How else would a wolf say it?”
When he said, “my bitch,” Lincoln new he meant Celeste. 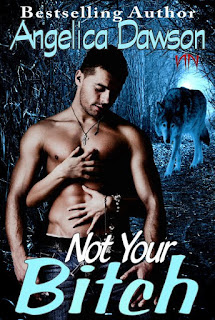 “Your bitch is at this party. She'll be fine.” And again, when he said, your bitch, he knew he meant Zoe.
“Wolf vocabulary sucks.” That didn't come out right either. It sounded more like, “Wolf no words.” The point came through. Linc didn’t stop running and would be outside the party in seconds.
“Can you see her from here?” Franklin asked, getting closer.
“No. Wait, yes.” He yipped and saw her on the deck. She climbed down and was walking straight toward him. He smiled, his tongue lolling, thinking she was coming to him.
“Lincoln, my bitch knows about me. Did you tell your bitch?”
Linc growled, hating that sound. “No.” A second later he said, “No, so why is she coming here?” He saw Elliot punching one of his friends in the arm and coming to loom over Zoe. Linc's muscles coiled, ready to spring, save her, and kill him.
“Stay.” Franklin told him. “They're still in the light of the yard.”