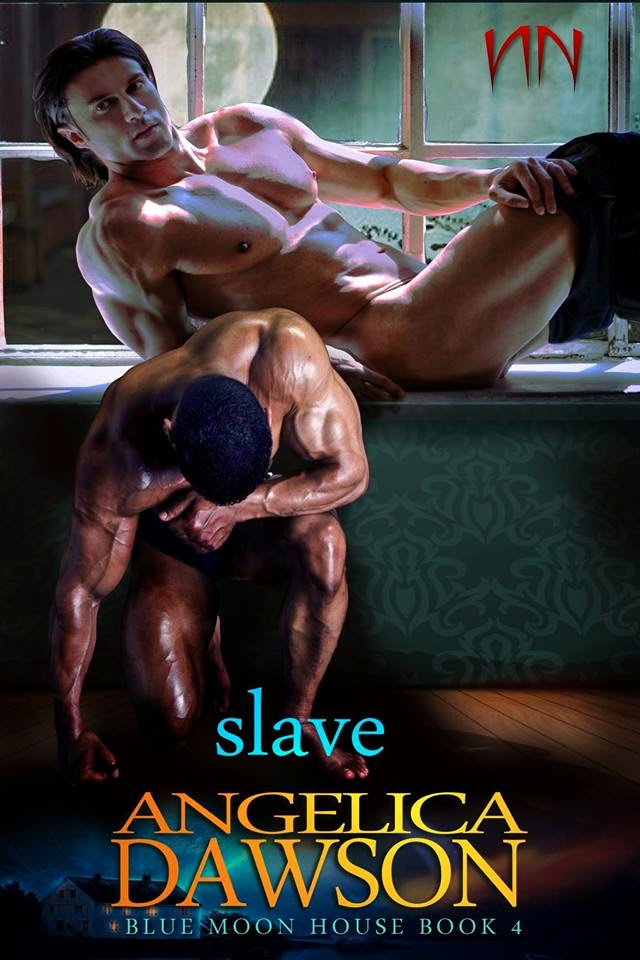 Coming close on the heels of Gentleman, March 15th is the release date for the fourth Blue Moon House book, Slave. Will is easily the most frightening and the most violent of the vampires in Blue Moon House, and now we can learn why. Best of all, you can get it for only $0.99 if you pre-order. You can also find the original Blue Moon House for the same price.

If you want a sample, I have been posting Tasters on Thursdays for a while, including a new excerpt yesterday. You'll get a good idea  how far this book goes off the beaten path and down dark corridors.

I hope you'll also help me share this sale and release with others.

And here is another sample from Slave:

Bart stood in the doorway, leaning on the jamb. “You came back. I won’t hide my relief. My position might give me more opportunity to find other men like us, but it doesn’t make keeping them any easier.”
Will’s brow furrowed. “I don’t understand, sir.”
“And don’t 'sir' me. I’m not your master. Call me Bart.” He poured himself another drink. “Have enough people bowing and scraping as it is,” he muttered.
Will lifted his gaze. “Take off your shirt.” It was an instinct, but one he thought wasn’t far off. This man was used to having people obey him. Did he go to Nicholas to have a Master?
Bart set the tumbler down with a thump. Then he tore open his coat and waistcoat, spraying buttons across the floor. He followed it with savagely yanking his shirt over his head.
Will swallowed, unsure what he’d just stepped into. Bart let his hands fall to his sides, making the expanse of his chest that much more prominent.
“And your trousers.” Will’s voice jumped, his excitement getting the better of him. He’d been dreaming of this so long with no one to share the fantasy. He imagined Louis often, but kept a safe distance from his friend, bottling the frustration up. If Bart hadn’t invited him explicitly, he probably would still be frustrated. As soon as he uttered that first command, however, it was like a thousand tiny pinches, all the little annoyances, had come together into one edge, one piercing desire. This was what he needed. Doffing his short pants and stockings, Bart stood exposed, Will fell to his knees. The man’s penis was as perfect as he remembered. It was smaller now, flaccid, and Will took the opportunity to run his tongue inside the foreskin. The gap wasn’t there long. Bart grew quickly to fill that skin, growing past it. Will marveled, not for the first time, at the nature of this vital organ, one responsible for the first moment of life.
With all his daydreaming, Will knew better than to ignore the sack this time. He held Bart’s cock so he could suck his balls into his mouth, rolling them on his tongue.
It hardly seemed enough time had passed, even though Will felt a twinge in his jaw, but Bart was throbbing, ready to come. Will sucked him deep into his throat, curling his tongue to cup the thick liquid. Bart tasted better than Will remembered, if that were possible.
“Will, you look...” Bart didn’t find the words, but he stooped to unbutton Will’s shirt. His fingers fumbled in his rush. Will’s head nearly crashed into Bart’s as he sprang to his feet. He needed to release his breeches.
Bart gasped, covering his mouth as Will stroked himself. A drop was hanging from his exposed head. A second gasp was audible and Will’s head turned to the door.
“The game is up, Martha.”