Totally Bound caters to readers with a passion for sizzling stories, powerful plot lines and compelling characters. They aim to give a totally delicious escape to anyone who picks up one of their books. Here are some of their most recently released titles.

Flip Side of Sin by Rosalie Stanton is the third book in the Sinners and Saints series. Since her inaugural venture to Earth, Cassie, Virtue of Chastity, has been lost in a sea of doubt. All of Heaven knows how badly she botched her first job. So when the Almighty gives her a new job—one in Sin City—no one is more surprised than she. Ira, Sin of Wrath, requires only a drink, a cigarette, and a warm girl to keep him happy—which makes his new Vegas assignment a very welcome trip. Ira might be there to work, but that hardly means he won’t find time to play… And when he spies a gorgeous blonde wandering through a casino, he knows she’ll make the perfect playmate. Until, of course, he discovers she’s off limits—not to mention, the enemy.

Wrong Number Right Guy is the first in Mia Watts' Hollywood Hottie series. It has been re-edited and re-released by Totally Bound. Ryan Pierce is in town shooting the latest romantic action movie and attending all the right publicity parties. An easy laugh and real conversation, as a result of misdialling, surprises him and he doesn’t want the man to hang up. Dar’s gig as an extra gives him a chance to meet the guy on the set who he accidently called. Could the loping mega-star be his phone-a-friend?

Purrfect Protector is the first in the Shifter Protection Specialists Inc. series by S.A. Welsh.
Never play cat and mouse with a saber-tooth tiger.
Kale Andrews reluctantly agrees to have a bodyguard from Shifter Protection Specialists, Inc. following disturbing mail from an obsessed fan. The easy babysitting job Aleksi was promised quickly changes from strange mail to threatening deliveries, so Aleksi has to become creative to keep his protectee out of danger. Since he’s a saber-tooth tiger and naturally dominant, most people aren’t strong enough to be with him in a relationship or even as a friend. Yet Kale seems to calm his beast, simultaneously exciting the man in Aleksi.

St. Hawk's Medical is a new series from Willa Okati and kicks off with Take Heart. Dr. Brendan West, a dreamer and a doctor, knows there’s more to life than the job. His first step after finding a temporary job at St. Hawk’s is falling for kind-hearted gardener Evan—only to discover that Evan’s already taken by boisterous Griff. For his part, Griff sees this as more of an opportunity than a threat. He likes the good doc’s kind heart and clear eyes, and the way he sees it, their lonely doc needs them just as much, or more. With Evan on board, he sets to work bringing Brendan into a ménage relationship. Brendan knows he could fall hard for the odd couple, but the thing is—he’s not in St. Hawk’s for the long haul. He can’t bear to surrender his heart if he’s only going to leave it behind.

Centerfold by Kris Norris follows Detective Scarlet Reid, who has spent the past three months trying to make her alter ego, Ms. December, a ghost of Christmas past. Forced to become the sexy centerfold in a high-stakes undercover assignment, she is presented with a gruesome new case that has a disturbing trend—one that has placed Scarlet on a list of possible targets. With limited options, she’s going to have to resurrect Ms. December—and her old partnership—which means facing the one man who stole more than just a kiss. Federal Agent Roman Kinkaid's final assignment with Scarlet changed him, but he’s ready to make things right—only he’s not alone. His partner and lover, Special Agent Aiden Cross, is just as invested and determined as Roman is to claim Scarlet as theirs.
This is a re-release of Centerfold, which has been expanded.

Ashe Barker has released Chameleon, a chance meeting, two strangers whose paths cross—in the same place at the same time, yet a world apart.
When mining engineer Ethan Savage spots the cloaked, veiled woman riding a donkey in the Moroccan desert, he thinks she wouldn’t look out of place in Biblical times. They pass, nod, smile politely and go their separate ways. But moments later, she rescues him from his crashed car, the first words she utters make Ethan realize that appearances can be deceptive. Shifting effortlessly between her traditional roots in the foothills of the Atlas Mountains and her professional life as the Totally Five Star hotel doctor, Fleur is a human chameleon. At first irritated then amused by the handsome stranger, Fleur knows the assumptions he’s made about her. As their paths cross once more at the luxurious hotel, she realizes he, too, is not all he seems.

And here is an excerpt from Chameleon!
Christ, it’s hot. 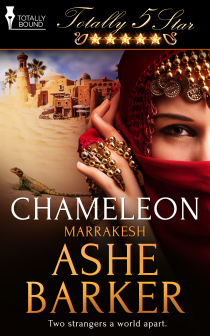