Continuing to introduce the authors of the Serviced anthology from Breathless Press, I have Shelli Rosewarne visiting today.Your first solo publication was released in December. What was that like? Have you found your writing and blogging has changed?

It was very exciting! It was a rather surreal feeling to see my book on places like Amazon, and I was amazed by how supportive people were about it. It seemed like everyone I saw kept coming up to me and asking about it. I don't think it's really changed my writing a great deal. I thought perhaps having something published might make me feel a little more confident about my work - but I still get the panicked 'oh, God, it's all rubbish' moments!

I know that feeling! Have you found social media helpful as a writer? How about for finding your audience?


I've found social media fantastic for meeting other writers. I think you can feel a bit isolated as a writer, it's rather a solitary thing. I really appreciate being able to talk to other people from across the world in similar positions and who understand both the ups and downs of it. Hopefully, it's helped increase my audience as well. I'm not the best at self promotion I must admit.

I'm on Facebook and Twitter - though I don't think I've ever quite got the hang of Twitter so updates on there tend to be a little sporadic!

That's normal. Can't be everywhere all the time! What spurs you to post a new blog entry? How do you decide what to blog about?

Erm, it varies I suppose. I rarely have a plan as far as blogging is concerned - which I should probably work on! It's fairly easy when you have things going on, eg., releases coming out or news to share. I sometimes need a poke to update when I don't feel I have anything too exciting happening. I still find myself thinking whether people would be interested in my random ramblings!

I recommend joining one or two weekly features (or creating your own!) just to make sure you update regularly. It puts it in the forefront. You have featured other authors sporadically. Is this something you see yourself doing more as time goes on?

Yes, definately. I did a few guest blogs last year, which were really fun, and am always happy to have visitors over.

Did you hear that authors? Mention her on twitter, I bet it won't take much cajoling! Both Angel for the Tree and Serviced are coming through Breathless Press. What made you choose them as a publisher?

I had seen them mentioned in a few online writer's groups I'm in and the feedback always seemed to be positive. I'd actually sent Angel to another publisher first and they had refused it on the grounds that they were already releasing a few with a slightly similar theme. Then I saw the callout for Breathless and thankfully they liked it! Everyone I've dealt with there so far has been lovely.

That's good. It's important to find people you enjoy working with. Have you looked at other publishers at all? What about them is appealing or not?

I have looked around, I think everyone likes to have options at the end of the day. For example, Breathless only tend to do ebooks at the moment and for some of the full lengths I've been working on it would be lovely to have a print book option. I currently have a submission in with a more 'traditional' publisher but it's early days yet. I think a lot depends on the book as well, I tend to write whatever comes into my head rather then sticking to a set niche, so different books may be a better fit with different publishers. 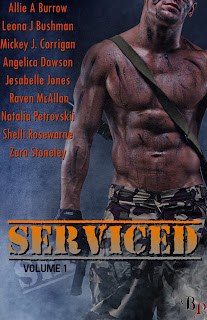 Yes, having a print version is nice, easy to pass around, put it on your shelf. Maybe they'll branch into print. Tell us about A Chance at Love, your contribution to Serviced, and give us a teaser.

Corporal Aidan Hamilton has the unenviable job of telling his best friend’s sister that her brother isn’t coming back. This is slightly complicated by the fact that from the moment he meets Suzanne Kelsey he knows she’s everything he’s ever wanted. While Suzanne might need someone to lean on at the moment, can he convince her that what they have is more than a short term fling?

Suzanne had always told her big brother that being a soldier was too dangerous, so when she sees the uniformed officer in front of her house she knows exactly what he’s here to tell her. While Aidan may set her blood on fire, Suzanne has already lost one soldier she loved and she’s not prepared to trust her heart to another one.
He'd moved closer and she could feel the heat of his leg pressing against her side through the thin covers.

"I should probably go," he muttered.

She felt a stab of panic—she didn't want to be alone. In fact, she thought suddenly, eying up the tanned chest that was so close to her now, what she needed was a distraction. A really good distraction. In fact, a six-foot, half-naked, almost in her bed already, distraction. She reached out her hand and lightly stroked it over his chest, feeling him tense, the muscles clenching under her touch. She met his gaze, seeing desire warring with restraint. Well, one would have to go, she thought, with a half-smile.

She leaned forward, bracing her hand on his chest, to lightly brush her lips across his. They were soft and warm. She felt him shift as though to pull back and she ran her other hand into the close-cropped hair at the back of his head, clutching him to her, her body now pressed against his. She ran her tongue along the seam of his lips, and he groaned. She felt the exact moment he gave in, when his body relaxed against her, his hand slid around to her back, crushing her closer against him, and his tongue plunged into her mouth. She moaned as their tongues dueled, heat spreading through her body. Christ, he sure as hell could kiss.
Posted by Angelica Dawson at 00:00